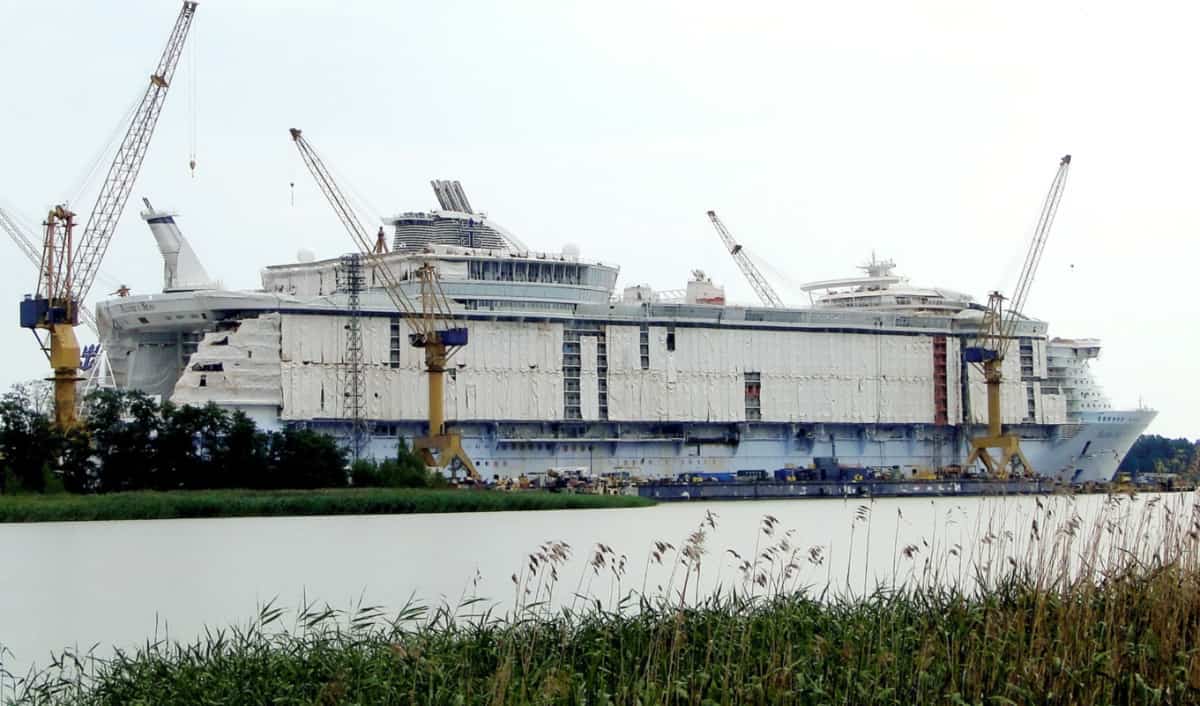 Have you ever marveled at the sheer magnitude of these vessels and wondered how long it takes to build a modern cruise ship?

When asking this question, you may as well be inquiring as to how much time it takes to create a small city, which is exactly what today’s cruise ships are – a floating city. It takes a great deal of planning, effort, and time to build these floating wonders.

With an incredible array of amenities, features, entertainment, activities, and culinary restaurants, there are many details that go into creating these modern cruise ships in the cruise industry. Yet despite their sheer magnitude, constructing one may not take as much time as one might think.

How Long Does It Take?

Building a cruise ship typically takes between 12 and 18 months. Construction begins with the laying of the keel and is completed upon launch.

Modern cruise ships contain all the amenities and features of a modern city. Their focus is on entertaining any passenger on board. Like Las Vegas, these vessels contain movie theaters, casinos, playgrounds, and numerous restaurants.

This isn’t on a small scale, either. Each cruise line wants to take what it’s offering to the next level. So, they are looking for the next thrill-seeking adventure ride, how to make things even bigger or more exciting, and how to appeal to different demographics.

The features and entertainment are getting larger. Movie theaters are incorporating more technology than ever before, and every cruise line strives to be the first in one area or another. They are all competing for people’s attention in a highly competitive market. They need to be the best.

A cruise company is devoted to providing its guests with the best experience possible. Standard features of a cruise ship include spas, gyms, fitness equipment, and swimming pools. There are also varieties of restaurants available that appeal to most patrons.

Where cruise lines try to outdo the other is offering unique attractions to their guests. This may include waterparks, mini-golf courses, zip-lining, go-karts, skating rinks, and more. Additionally, there are hundreds of accommodations for crew members, guests, cabins, and staterooms to construct.

Worth Reading: How Big is a Cruise Ship?

With all of these details, you may think that constructing a cruise ship would take forever. Yet once you understand how cruise ships are built, the timeframe seems more plausible.

Cruise ships go through various stages before they’re launched. Here are the highlights of the typical steps to construct a cruise ship from beginning to end:

While most major cruise ships take 12-18 months to build, some take even longer. For example, Royal Caribbean’s Wonder of the Seas took three years to complete, although this was partially due to COVID delays.

Major cruise lines do not employ people in-house to create their fleets. This is due to the high costs of the equipment needed to build them, which adds to the cruise ship cost.

There is also a great level of expertise and knowledge required to build them. There are numerous specialist shipbuilders responsible for putting mega-ships together. The major shipbuilders include Meyer Werft in Germany (also owns Meyer Turku in Finland), Fincantieri in Italy, and Chantiers de l’Atlantique in France.

These shipwrights own massive shipyards located in riverside and coastal towns. They construct multi-million-dollar ships from the sea up to the surface prior to sailing.

When we look at the location, there are only four major shipyards in existence that can create large cruise ships. We’ve already mentioned the first three, but there is also Mitsubishi Heavy Industries. Another shipyard to take note of is the MV Werften in Germany, which was owned by the now-bankrupt Genting Cruise Lines.

Fincantieri is in Italy. It created its first cruise ship in 1990. Today, it is the largest European builder. Meyer Werft is a family-owned business in Papenburg, Germany, which also owns the popular Meyer Turki shipyard in Finland.

Meyer Werft began creating cruise ships in the mid-1980s. The shipyard is in a unique location as there is no direct access to the ocean. Ships need to be transferred via the Ems river going to the North Sea.

Chantiers de l’Atlantique is formerly known as STX Europe/France and is based in France. The shipyard is well-known for the construction of the Oasis-class cruise ships for Royal Caribbean and larger vessels for MSC Cruises.

What Materials Are Used?

High-strength steel and aluminum are used to keep a low center of mass despite the cruise ship’s massive size. The heaviest items, like propellers, engines, and fuel tanks, are housed in the lower part of a cruise ship.

Carbon fiber and fiber-reinforced plastics are frequently considered. Theoretically, they can lessen the cruise ship’s mass, thereby bringing the center of gravity down and reducing weight above the vessel’s waterline.

With some vessels reaching 500 feet high, putting these vessels together requires structural engineering. The hull is the first part constructed while on dry land. This is the vessel’s base. It must be watertight prior to placing anything on top.

Superstructures are built in smaller blocks remotely, then placed on the hull piece by piece, almost like a massive Lego build.

Cabins tend to be created separately from the rest of the cruise ship. The construction is like a car factory wherein every aspect is added, which includes fitted furniture and plumbing. Once done, they are taken to a shipyard. This is where they are slotted into the cruise ship using magnetic force.

Water control systems are included, allowing crews to build the ship outside and inside the water. It allows them to simultaneously test the newly constructed hull for water tightness. It also allows engineers to do any work necessary on the underwater sections.

Incorporating man-made dams allows the shipyard team to empty and fill their construction site as often as they choose.

Major cruise lines place the finest decor and details that money can afford. By employing experienced interior designers and top artists, they ensure cruise ships appear to be high-end resorts rather than simple transportation vessels.

Once finished, the cruise ship will be a floating, luxury vessel that will amaze a plethora of new guests. Cruisers will be taken in by the latest technologies, amenities, restaurants, and entertainment.

Read Also: How Much Does It Cost to Build a Cruise Ship?

The length of time it takes to build a cruise ship depends on its size and the amenities required to create it. The duration also changes based on the experience of the shipbuilders.

The most experienced team will get the work done more quickly than one with a moderate amount of experience. Regardless of the cruise ship size, there is a basic timeline involved based on actual experience.