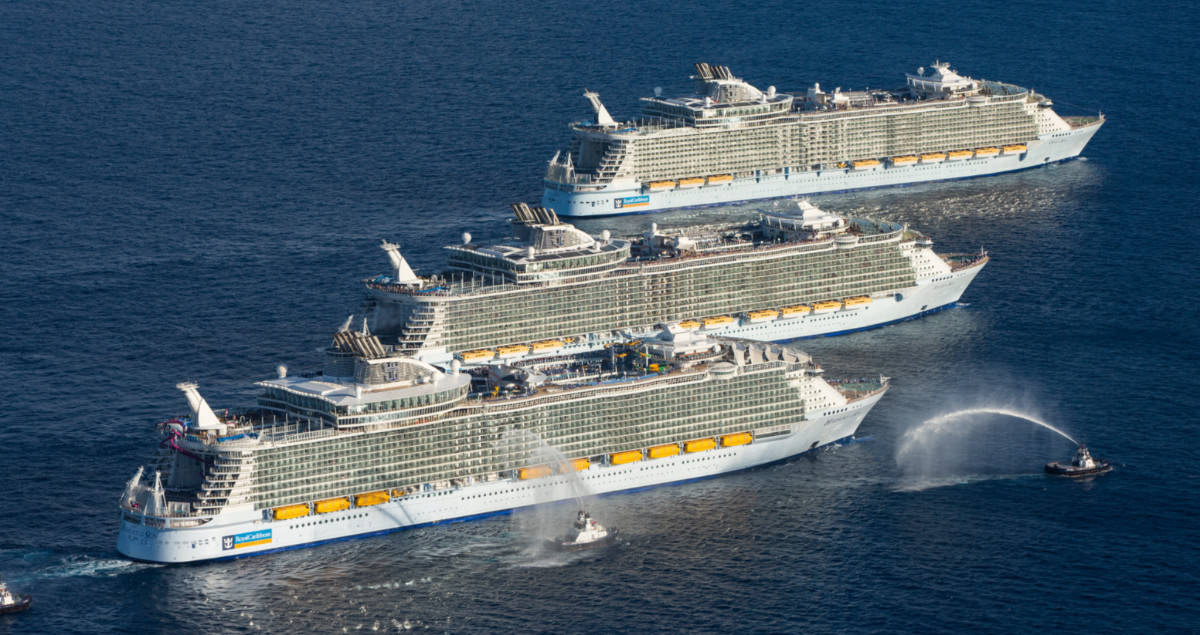 If you’ve considered taking a Royal Caribbean cruise, then you’ve probably come upon the cruise line’s Oasis class cruise ships. If you’re not familiar with the mega cruise ships, which are the largest in the world, you might not exactly get what all the hype is about or what the differences are.

Essentially, a cruise ship “class” is a grouping of ships that all share similar features. Every decade or so, a cruise line will put out a new class of ships that are designed to be, typically, bigger, better and more impressive than its past cruise ships.

The Royal Caribbean Oasis class ships are some of the cruise line’s most popular and newest — so what do you need to know if you’re thinking of taking a cruise on one?

Here’s everything you need to know about this hugely popular class of Royal Caribbean ships.

What is the Oasis Class?

Currently, all of the Oasis class vessels are considered the largest passenger ships in the world, with Wonder of the Seas being the largest of all.

However, Wonder of the Seas won’t keep this notable honor for long. Royal Caribbean confirmed that its new Icon-class ship, Icon of the Seas, will be the largest cruise ship ever built once it’s finished, surpassing the Oasis class.

But, Icon of the Seas is still under construction, so it’s a long time coming. If you want to sail on one of the largest cruise ships in the world for now (and at least for the next few years), you want to go with an Oasis class cruise.

When the first Oasis class ship was revealed in 2009, critics doubted that Royal Caribbean could really pull off these massive ships in a way that would remain enjoyable for passengers.

However, the cruise line proved the naysayers wrong and delivered what has become one of the most popular cruise ship classes ever and the first over 200,000 gross tons. So just how big are these Oasis class cruise ships? Here’s what to expect.

But beyond just the size of these massive ships, their design makes them remarkable as well. They introduced a lot of firsts to the cruising industry, from entertainment venues to luxurious accommodations, upping the ante for the entire cruising industry. Here are a few ways they stand apart.

Oasis class ships are split into seven different neighborhoods, to help you better plan your explorations and adventures while on board. Each neighborhood boasts its own unique feel and vibe.

The Royal Promenade is kind of your introduction to the ship, a hub where you’ll find lots of activity, no matter the time or day. There are shops, restaurants and entertainment galore.

Central Park is more of an oasis (get it?) with lots of lush greenery and high-end dining options and shopping.

Entertainment Place is your neighborhood for all things entertainment, near the Royal Promenade. You’ll find lots of nightlife attractions, the casino, a main theater and even an ice rink. If you want to be entertained for a while, this is the place to go.

The Boardwalk is just what it sounds like. Reminiscent of vintage boardwalks from decades past, this family-friendly neighborhood offers kid-favorite dining venues and the amphitheater-style AquaTheater (which features the deepest pool at seas!).

The Pool and Sports Zone is your neighborhood for adventure and water-based fun. But beyond the four pools, surf simulators and adults-only Solarium, there are also sports courts and mini golf, as well as the world’s first zip line at sea.

The Vitality at Sea Spa and Fitness Center may not feel like it deserves its own ranking as a neighborhood on these ships, but that’s only what you’ll think at first glance.

Both the spa and fitness center are expansive, and the spa alone offers not just treatment rooms, where you can find all of your favorite spa services, but also relaxation rooms, steam rooms, a sauna and a kid-specific spa.

Lastly, the Youth Zone is where kids go to play during your cruise, no matter their age. There’s a nursery and then various areas (separated) for elementary-age kids, preteens and teens, so everyone gets their own space.

However, beyond all this, if you do book a cruise on Wonder of the Seas, you’ll find an additional neighborhood on offer: the Suite Class Neighborhood. Only available to upgraded, suite-class guests, the neighborhood features a private sun deck and plunge pool, private restaurant and Ultimate Family Suites with cool amenities like an in-suite slide.

As mentioned, when the very first Oasis class cruise ship, Oasis of the Seas, entered service, it introduced a lot of new features to the cruising industry.

This is just in addition to all of the other cool features that Oasis of the Seas introduced that, while maybe not measurable, were still pretty impressive. The Central Park neighborhoods, for example, feature more than 10,000 live plants.

With each Oasis class refurbishment and new ship addition (yes, even though it’s not an old ship, Oasis of the Seas has actually undergone two refurbishments since it premiered in 2009), new shops and restaurants are added, and always to the delight of travelers.

One of the things that cruisers often say about the Oasis class cruise ships? That the experience that they have during their cruise is just like the cruising experience that Royal Caribbean advertises on television and in its ads.

You have the thrilling adventures, the relaxing experiences, the family fun — all of it is just as depicted. Each ship offers the “wow” factor and enough to keep all the family busy during the voyage.

Of course, it is worth noting that not all Oasis class vessels are the same. There are differences. While all are great, the newest are going to be the biggest, best and freshest, with the newest and latest and greatest amenities. The older ones, like 2009’s Oasis of the Seas, are still amazing — just different.

Oasis of the Seas and Allure of the Seas were pretty similar when they debuted, so you won’t notice too many differences in these first two ships, beyond the few upgrades that have been made during refurbishments. However, the larger differences start to arrive when you look at Harmony of the Seas.

When debuting, Harmony of the Seas offered two extra restaurants: Jamie’s Italian and Wonderland. It also offered several entertainment venues that aren’t on the older ships, including an escape room and multi-deck water slide area.

Symphony of the Seas offered additional restaurants when it debuted, too, including El Loco Fresh, Playmakers Sports Bar and Hooked Seafood. It also offered a laser tag arena.

Wonder of the Seas, meanwhile, introduced the largest-ever Ultimate Family Suite, a new restaurant, The Mason Jar and that brand-new neighborhood for suite-guests only.

The Oasis class ships are often compared to Royal Caribbean’s Freedom class, which were once-upon-a-time the biggest cruise ships in the world, at least until Oasis of the Seas entered service in 2009.

Freedom class ships still offer a lot of the adventure activities that you can expect on an Oasis class ship — such as FlowRider surfing simulators, multiple pools, mini golf, rock climbing, etcetera — but you won’t find some of the other popular activities, like the zip lines.

Additionally, the Ultimate Abyss slide (the tallest waterslide at sea!) is featured on Oasis-class ships only.

In size, there’s a big difference on Freedom class ships, as they’re only about 60% of the size of the Oasis class ships. In the fleet are also the popular Quantum class vessels, that offer many innovations such as the robotic bartenders, North Star and a skydiving simulator.

Oasis class staterooms offer a few different accommodation options that you won’t find on other cruise ships. These include…

The Oasis class also offers its Royal Suite Class and, on Wonder of the Seas, a suite neighborhood, for extra amenities for those who have upgraded to a suite for their cruise.

Of course, you’ll also find other staterooms on the ship, such as interior staterooms and virtual balcony staterooms, which are standard on other Royal Caribbean ships. You can also expect the number and type of staterooms available to differ according to which vessel you’re on.

Oasis class cruise ships offer an impressive number of dining venues — over 20 restaurants in many cases. Like on most cruise ships, you’ll find a mixture of complimentary and specialty restaurants.

Most will feature one or two main dining rooms, a buffet, and specialty restaurants that provide a variety of cuisines, from Italian to American steakhouse to Japanese.

To give you an idea of what to expect, these are the dining venues featured on the newest  ship, Wonder of the Seas:

And then these are the restaurants you can expect on the oldest Oasis class ship, Oasis of the Seas:

So, as you can see, the lists are very nearly identical, even though the two ships were built more than a decade apart. However, Oasis of the Seas did receive a multi-million upgrade in 2019 in Cadiz, Spain, and does now feature newer venunes.

In contrast, the Oasis class bars and lounges are plentiful, but they have changed a bit more over the years. But the main (and most important) point? You can just about always find a drink onboard, no matter where you are or the time of day.

Again, here are the bars and lounges featured on Wonder of the Seas, the newest Oasis class cruise ship:

And here are the bars and lounges featured on the very first Oasis class ship, Oasis of the Seas:

As you can see, many of the older bar and lounge spaces have received upgrades. You’ll find, once you’re onboard, that many have just received new branding and names, and remain in the same spot.

New bars have also been added, with one of the most notable being the new Vue bar for Wonder of the Seas, a cantilevered bar that offers panoramic ocean views. You definitely won’t be left wanting for options, though, whichever ship you’re on.

Does a Royal Caribbean Oasis class cruise sound like the best option for your family? See where one of these magnificent five ships can take you and your crew, as early as this summer.

What are the Oasis class cruise ships?

How many Oasis class cruise ships are there?

How big are the Oasis class cruise ships?

All Oasis class cruise ships weigh in at more than 225,000 gross tonnage, with the largest weighing 236,857 gross tons. 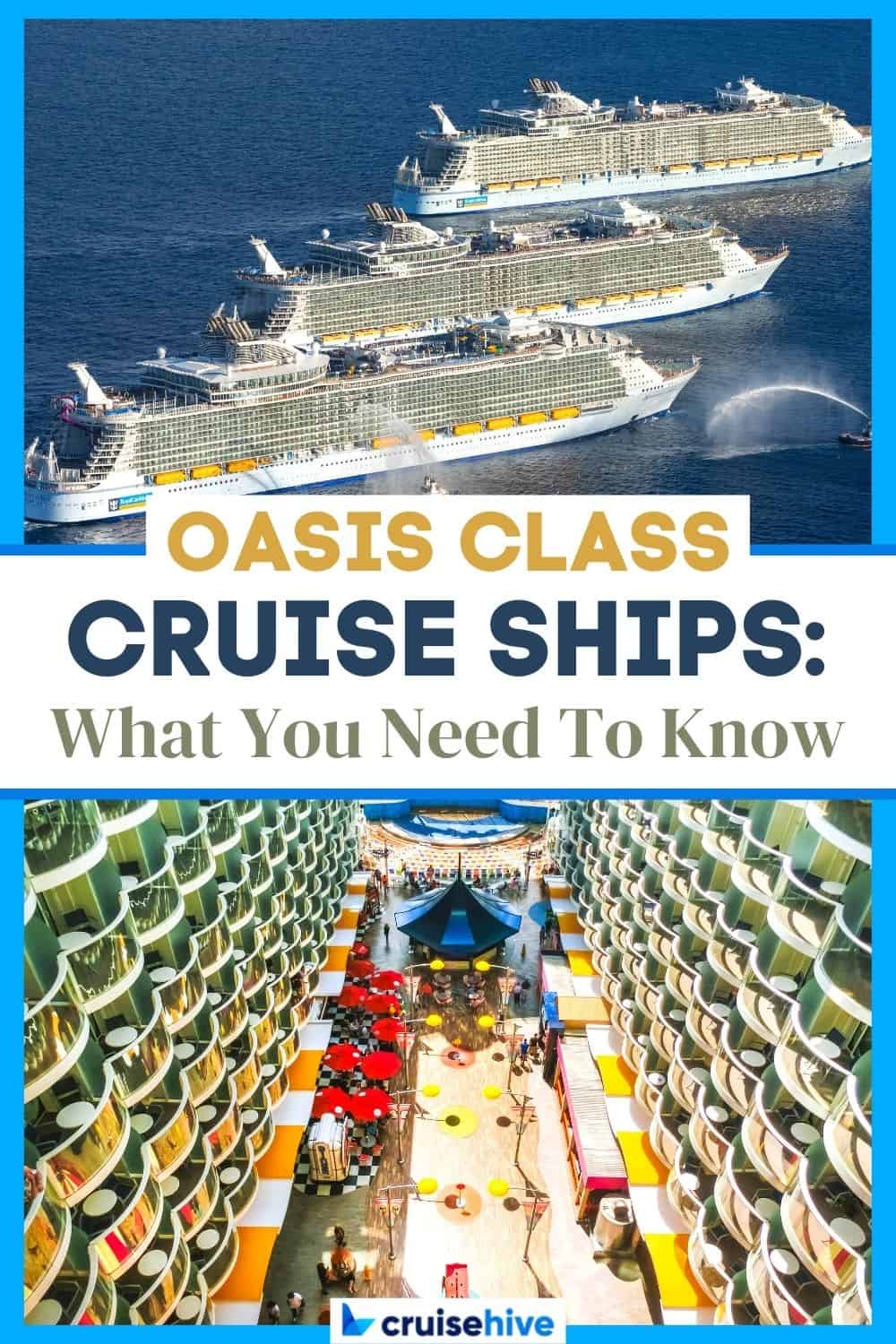