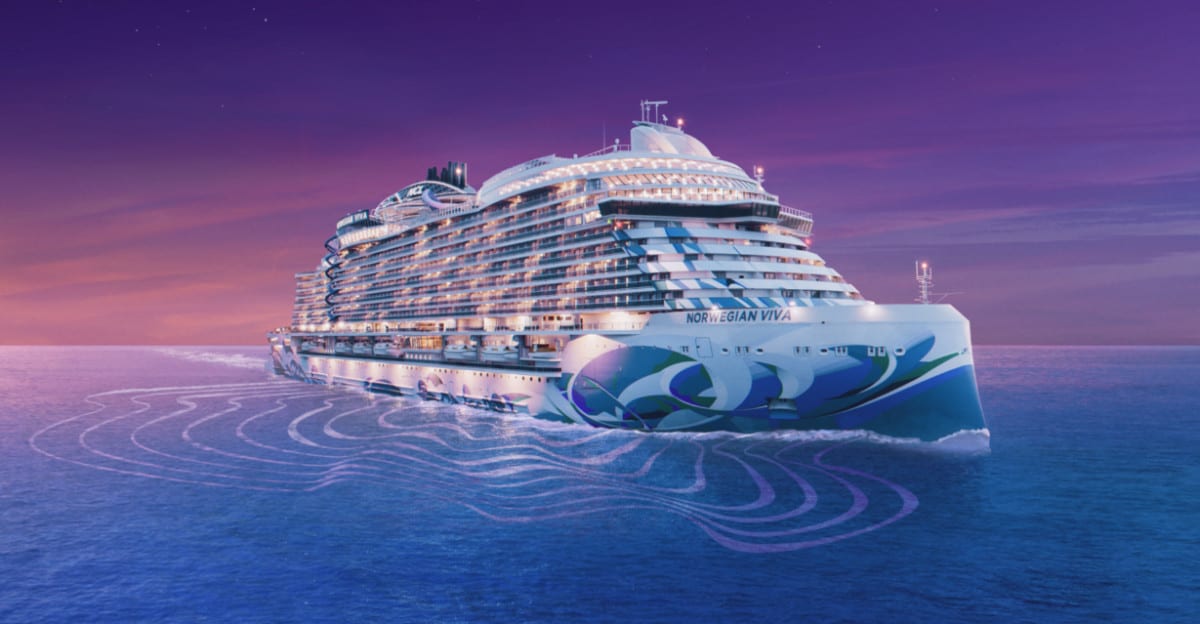 Norwegian Cruise Line has announced necessary cancelations for the debut of its second Prima-class ship. These cancelations, though a year from the ship’s planned debut, are due to ongoing global supply shortages that are impacting work at shipyards, including construction work on new vessels.

Norwegian Viva, sister ship to the upcoming Norwegian Prima, will be delayed by at least two weeks in 2023. In communication sent to guests and travel partners, Norwegian Cruise Line announced the following:

“We regretfully inform you that as a result of the global supply chain constraints impacting industries worldwide and the related downstream construction delays at the shipyard building our next class of ships, Norwegian Viva’s June 15, 2023 and June 24, 2023 sailings have been canceled.”

The 142,500-gross-ton Norwegian Viva is currently under construction at the Fincantieri shipyard in Marghera, Italy, as is her sister ship, Norwegian Prima.

The ships are the first two of the highly anticipated new Prima class, the first completely new class for Norwegian Cruise Line since the popular Breakaway class debuted in 2013.

The canceled sailings were both planned to be 9-night voyages, the first sailing from Lisbon, Portugal to Rome, Italy, calling on various ports in Spain, France, and Italy along the way.

The June 24 voyage was one-way from Rome, Italy to Trieste, Italy, calling on a number of popular Italian ports as well as destinations in Croatia, Slovenia, and Greece as well.

Both June 2023 sailings for Norwegian Viva have also been removed from the cruise line’s website and are no longer available for booking. Impacted guests will receive a full refund automatically processed back to their original form of payment.

No other compensation is offered, as is fair since the cancelation is being made a year ahead of time.

The cruise line explains, “We are committed to always putting our guests first. This includes providing information regarding any changes to voyages with as much advance notice as possible.”

Since the now-canceled sailings are a year away, booked guests have plenty of time to alter their travel plans to rebook on a later Norwegian Viva sailing or else to consider different cruises on other vessels.

This is a 9-night sailing calling on ports in Italy, Greece, Croatia, and Turkey, though it is possible this itinerary may also be revised as the ship’s progress toward completion continues to be evaluated.

Guests booked on Norwegian Viva should remain in close contact with the cruise line or their travel agent for updates and options if changes are made.

The first ship in the Norwegian Viva‘s class, Norwegian Prima, has also suffered delays. In April, the cruise line announced that Norwegian Prima‘s inaugural sailing – originally scheduled for August 17, 2022, had to be canceled due to supply chain challenges.

While further details of exactly what supply chain issues have had such dramatic impacts on these two new vessels have not been confirmed, many construction industries are suffering from lack of materials that are leading to manufacturing delays.

This type of delay can quickly snowball a shipyard’s entire schedule, pushing back timelines for multiple vessels.

Disney Cruise Line’s new Disney Wish, for example, had 12 sailings canceled, which delayed its debut from June 9 until July 14, 2022. While the Omicron COVID-19 variant was cited as a main reason for that delay, supply chain issues are also likely to have been part of the cause.

Virgin Voyages’ upcoming third vessel, Resilient Lady, has also been delayed for at least several months, from August 2022 until the second quarter of 2023. The cruise line cites not only supply chain shortages, but also international travel restrictions and crew shortages for that lengthy delay.