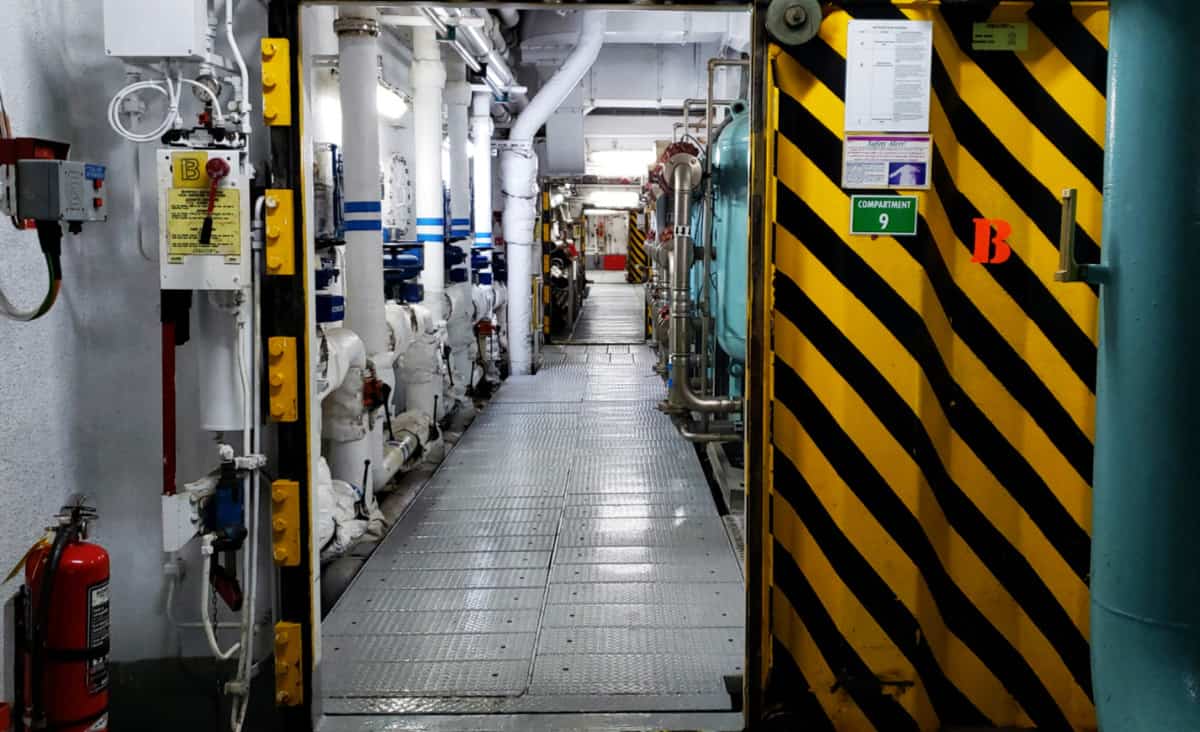 Without a cruise ship engine, these vessels would be nothing more than a floating hotel. They would drift aimlessly at sea and would lack any form of propulsion. Looking at the sheer size of these vessels makes one wonder how large an engine needs to be to maneuver the ship successfully in water.

Older cruise ships may still use a diesel reciprocating engine to generate enough power to move them. Power is supplied to the ship through a transmission going to a propeller shaft. The transmission determines the revolution of the propellers.

Modern cruise ships use gas turbines or diesel-electric engines for their power source for propulsion. They also provide power for the ship’s systems as well. Many of the larger vessels depend on two sources of power: propulsion and electrical power.

How Does a Cruise Ship’s Engine Work?

Diesel engines are the most traditional type of cruise ship engine. In this engine, diesel fuels its crankshaft and pistons. These attach to a propeller, which advances the ship.

Gas turbine engines create heat that transforms mechanical energy into electricity. To achieve this reaction, compressed air fires into a combustion chamber. Hot exhaust is forced over a turbine, which spins to mechanically drive the shaft. Power can then be used to spin generators.

It works the same way in diesel-electric engines. This type of engine provides enough electricity to move the ship’s propellers and power the cruise ship’s appliances, lights, air conditioning, etc. Most ships will contain several engines connected to their generator.

These engines are very efficient, independent of speed. However, a direct drive system is used as opposed to a turbine. Output shafts are used to generate electrical power and are connected to the generators.

Both engines require a great deal of fuel. Larger vessels can consume about 250 tons of fuel daily. This is the equivalent of 80,000 gallons of fuel each day. Medium-sized ships will require 150 tons per day and as size decreases, fuel consumption does as well.

Worth Reading: How Big is a Cruise Ship?

A general rule of thumb is that the larger the vessel is, the more power is required for movement. This comes from fuel and engines.

Passengers will never see the magnitude of a cruise ship’s engine. Cruise ships require the heaviest weight to be placed at the lowest possible point. Therefore, engines are found close to the bottom of the ship. Since engines power ships through water, they can be quite large for mega ships.

How Big Is a Cruise Ship Engine?

A modern cruise ship doesn’t contain just a single engine. Cruise ships like the Oasis-class (Royal Caribbean) contain six engines, while many others have only four. Engine rooms are very large and can span several decks. Space is needed not just for engines, but for fuel tanks, generators, engine workshops, and the control room.

The number of engines range from five to six, and the power rating for each one is between 9-15 megawatts.

Since they are so large, they are placed in a separate compartment found in the cruise ship’s machinery space. This is known as the DG room. Modern passenger ships contain two DG rooms, which are forward and aft. They are separated by watertight bulkheads.

Each DG room contains its own independent fuel, air, lubrication, and cooling water supply systems. This is for the safety of the ship and for redundancy. It’s insurance for any emergencies like flooding and fire that can occur.

The largest cruise ship, Wonder of the Seas, utilizes six marine-diesel sets, with each composed of three 16-cylinder Wartsila engines.

What Engines Are Used in Larger Ships?

Modern, larger cruise ships use two or three stroke, low speed, crosshead, or medium speed engines. Engines operating at higher speeds tend to be found on smaller vessels. Determining the type of engine that is installed on a new cruise ship involves examining the engine’s size.

When it comes to cruise ships, the typical engine is a two 16-cylinder Wartsila 16V 46D which is a common rail engine. They also use three 12-cylinder Wartsila 12V 46D engines to power the ship. Each one of these produces about 19,480 kw of water.

Where Are Engines Located?

In newer cruise ships, engines are found on the lower decks toward the aft. They are not completely to the back of the boat but are found in the mid-aft.

Insulation serves a dual purpose. It keeps out noise and reduces the heat generated by fully operating engines. It prevents this heat from escaping to adjacent decks. If it were to escape, guests would be extremely uncomfortable. The design is meant to contain this.

To get an idea of how loud an engine is, it can have a range that exceeds 173 decibels. It is so loud that it is in the range where damage to hearing can quickly occur. However, thanks to proper insulation methods, they don’t appear to be that loud.

How Much Power Is Needed for a Cruise Ship?

These massive vessels can consume power up to about 50,000 horsepower. One horsepower on these ships equals 746 watts. Engines are designed to move large propellers or produce enough diverted electricity to drive the propellers.

While cruise ships can move upwards of 34.5 miles per hour (30 knots), most will only travel at 23 miles per hour (20 knots). There are various reasons for speed variations which are outlined in detail in this article.

With So Many Engines, Is It Possible to Experience Engine Failure?

Due to high specifications and standards, it is rare for a cruise ship to experience engine failure. The International Maritime Organization has a “Safe Return to Port” initiative.

This covers every ship constructed after 2010. It requires full redundancies, which include two engine rooms. If the main engine should ever fail, power to electrical services should still run.

Engine failure can occur, though, in the ship’s main engines, which are responsible for moving the ship. Improper maintenance, mechanical issues, and human error can all be factors in causing engine failure.

What Happens if This Occurs?

If it does happen, the captain consults the chief engineer to diagnose the cause of the malfunction. They will assess the severity and determine whether it is fixable. Modern cruise ships don’t rely on a simple diesel engine.

There are up to six engines in operation. It will be up to the captain and the chief engineer to determine if the vessel can continue if one of their engines isn’t working properly. If the captain feels the cruise ship will not be able to function, they will consider other options. This may involve sending signals for assistance while at sea.

If the waters are calm, cruise ships are safely towed to a nearby shore. In rougher seas, other options may need to be considered for the safety of those on board.

Abandoning the ship is only done as a last resort because moving guests from one ship to another over open sea can be dangerous. This is especially true if it is done in bad weather. This is the same if passengers are instructed to go into lifeboats.

It is up to the captain to determine the best option. Generally, the safest place to be is your current location at sea. The ship is seen as the lifeboat. The cruise industry guidelines comment that the safest method to returning large numbers of guests to a port is by using the ship itself.

Are Passengers Safe if There Is Engine Failure?

Most of the time, passengers are fully safe. The No. 1 priority of all cruise lines is to keep all their guests completely safe. If the unexpected happens, know that the cruise ship has backup plans. A well-trained crew knows how to properly handle the situation so you are in safe hands.

Generally, engine failure only generates a brief interruption before it’s fixed. In other instances, it may just slow the speed of the vessel. Cruise lines will never jeopardize the safety of guests nor put them at risk if the cruise ship is unsuitable for sailing.

In the event of an emergency, guests can be proactive by paying attention to the mandatory safety exercise.

This is where crews demonstrate how to safely use life jackets and outline a designated meeting point in the event of an emergency. Be sure you know where your life jacket is in your cabin in the event you should ever require one.

Generally, cruise ship engines run a long time before experiencing any difficulties. Regular maintenance by the chief engineer is conducted to make sure that they are running in top condition and to prevent any mishaps while at sea.

When we examine the sheer size of mega-ships, the fact that engines and engine rooms are built so large is understandable.

It takes numerous engines to move something that is so massive in size and weight. Combine that with the horsepower required to make it move, and you also appreciate the cruise ship’s knots.

Going aboard a cruise ship is a leisurely experience. They do not travel fast like motorboats, for example. These ships contain massive amounts of steel and other components, which contribute to its overall weight. It requires anywhere between five-to-six engines for it to function.

Read Also: How Long Does It Take to Build a Cruise Ship?

Cruise ship engines are always kept in top functioning order. This is to ensure the safety of the guests. If one goes down, this is not a major concern as there are four to five others that can compensate. The ship may move slower, but passengers will safely return to port.

Celebrity Ship to Sail Schitt’s Creek Cruise in March 2023
What Is on the Lowest Deck on a Ship?
Carnival Cruise Ships Have Carried 3 Million Guests Since the Cruise Line’s Restart
Carnival Cruise Line Updates Testing Protocols for The Bahamas
Royal Caribbean’s Newest Cruise Ship Terminal Will Open This Fall