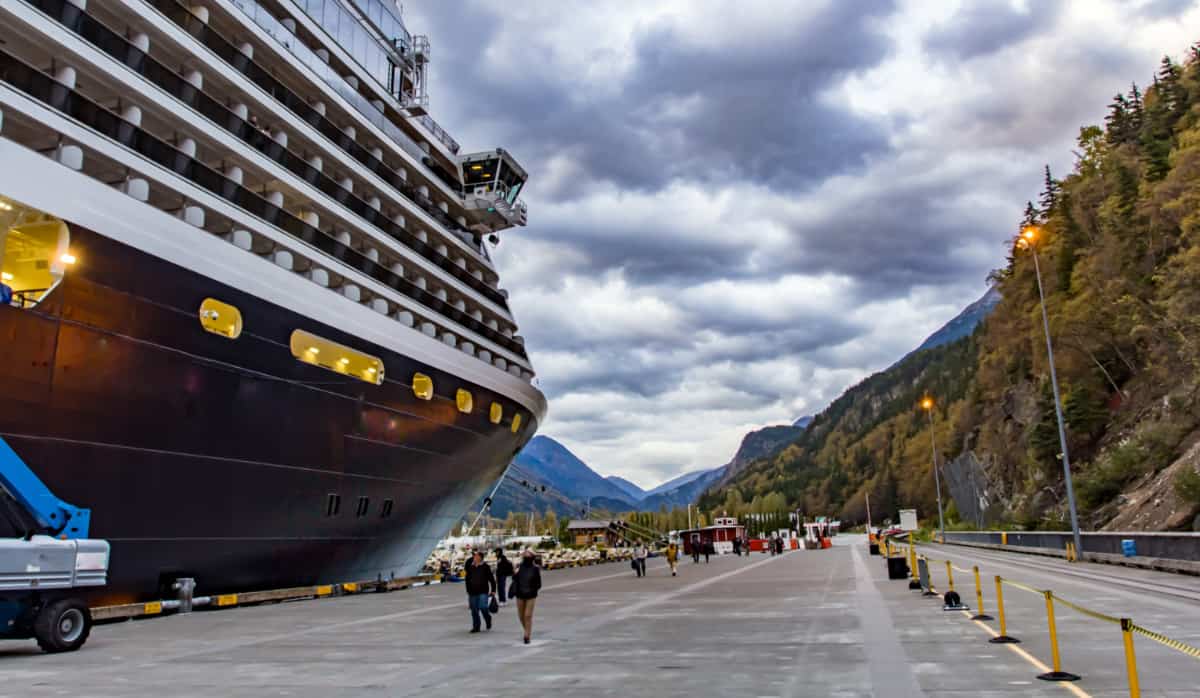 Another rockslide adjacent to the popular White Pass Railroad Dock in Skagway, Alaska, has caused damage and led to the full closure of the dock, which is expected to remain closed for the rest of the 2022 sailing season.

This is the third rockslide in recent weeks, and officials are concerned about the possibility of more – and more severe – rockslides to come.

The most recent rockslide was on Friday, August 5, following a slide just two days earlier on Wednesday. Both slides caused damage to the White Pass Railroad Dock, and Friday’s slide caused significant damage to shipping containers placed along the length of the dock to be used as tunnels and protect pedestrians from falling rocks.

No injuries were reported in either recent slide, and no cruise ships were damaged.

According to The Points Guy, the August 5 slide has raised further concerns that a more significant rockslide, one that could cause even more damage, may be imminent. Poor weather predicted for the Skagway area could impact slide activity by further destabilizing the mountainside.

The mayor of Skagway, Andrew Cremata, has declared an emergency for the port community, which should help ease state and federal assistance to mitigate the risk and stabilize the mountainside.

“It’s a tremendous problem,” Cremata said at a public meeting on Saturday, August 6. “I guarantee you, it is one we’re going to solve before next season because we don’t have any other choice.”

The dock was temporarily closed after the first rockslide was reported on June 23. That slide caused significant dock damage, as well as minor cosmetic damage to Discovery Princess, which was visiting Skagway at the time.

Additional mitigation measures were put in place, and the dock reopened with modified operation – such as changing where cruise ships could position gangways – on July 5.

Immediately after that first slide, the geotechnical and environmental consulting firm Shannon & Wilson examined the area and evaluated the risks. The firm examined past slide events, current slope conditions, and mitigation efforts already in place.

Ultimately, the determination was that future rockslide risk was “significant” and recommendations were made for further work to secure the slope and improve safety. Different options were implemented immediately, before the dock reopened.

Now, with two additional rockslides in just three days, the dock is likely to remain fully closed for the remainder of the cruising season. The last ship scheduled to call on Skagway is the Breakaway Plus-class Norwegian Encore, which is planned to be in port on October 19.

Because the White Pass Railroad Dock is the only dock in Skagway capable of accommodating the largest cruise ships, some ships have canceled port calls and diverted to other destinations such as Icy Strait Point and Sitka instead.

Cremata estimates that more than 30 vessels have already diverted to other ports, totaling more than 100,000 passengers who have missed out on Skagway in the past six weeks. If these diversions continue, the port city may lose as much as half of its expected tourism revenue for the overall cruise season.

“The inability of vessels to berth in Skagway due to the slope failure risk will have impacts on the entire southeast Alaska tourism economy,” Cremata said.

Traditionally, the later weeks of summer and early autumn are busiest for Alaska cruises, as wildlife sightings peak and autumn foliage begins to blaze with spectacular color. Skagway is usually the busiest cruise port offered on Alaska itineraries.

Some ships are still able to visit the charming community by utilizing other docks or arranging to tender passengers from an anchored position without using the at-risk dock.

According to the Cruise Lines International Association (CLIA), cruise visitors account for 57% of summer tourism to the Last Frontier.

The loss of that income – following the complete cancelation of the 2020 season due to the industry-wide shutdown and the greatly diminished 2021 season due to the late restart of cruising and different safety protocols – could be devastating. It would not only Skagway, but also to many smaller, nearby communities that rely on summer visitors to sustain operations for the rest of the year.

Passengers booked on upcoming sailings with planned visits to Skagway should stay in contact with their cruise line for possible itinerary changes and updates.